The need for transitioning towards low-carbon energy systems, and the recent boom in available data, allows for a constant re-evaluation of global electricity sector decarbonization progress, and its underlying theoretical assumptions. Arguably, the existing decarbonization literature and institutional support frameworks focus on top-down supply side mechanisms, where policies, goals, access to financing, and technology innovation are suggested as the main drivers. Here, we synthesize eleven global datasets that range from electricity decarbonization progress, to quality of governance, to international fossil fuel subsidies, and environmental policies, among several others, and use methods from data mining to explore the factors that may be fostering or hindering decarbonization progress. This exercise allows us to present numerous hypotheses worth exploring in future research. Some of these hypotheses suggest that policies might be ineffective when misaligned with country specific motivators and inherent characteristics, that even in the absence of policy there are particular inherent characteristics that foster decarbonization progress (e.g., relatively high local energy prices, foreign energy import dependency and the absence of a large extractive resource base), and that the interaction ofcountry-specific enabling environments, inherent characteristics, and motivations is what determines decarbonization progress, rather than stand-alone support mechanisms. We present the hypothesis that existin gsupport mechanisms for decarbonization may be relying too much on blanket strategies (e.g., policies, targets),and that there is a need for support mechanisms that encompass a wider diversity of country-specific underlying conditions.

Power system balancing for deep decarbonization of the electricity sector

We explore the operations, balancing requirements, and costs of the Western Electricity Coordinating Council power system under a stringent greenhouse gas emission reduction target. We include sensitivities for technology costs and availability, fuel prices and emissions, and demand profile. Meeting an emissions target of 85% below 1990 levels is feasible across a range of assumptions, but the cost of achieving the goal and the technology mix are uncertain. Deployment of solar photovoltaics is the main driver of storage deployment: the diurnal periodicity of solar energy availability results in opportunities for daily arbitrage that storage technologies with several hours of duration are well suited to provide. Wind output exhibits seasonal variations and requires storage with a large energy subcomponent to avoid curtailment. The combination of low-cost solar technology and advanced battery technology can provide substantial savings through 2050, greatly mitigating the cost of climate change mitigation. Policy goals for storage deployment should be based on the function storage will play on the grid and therefore incorporate both the power rating and duration of the storage system. These goals should be set as part of overall portfolio development, as system flexibility needs will vary with the grid mix.

The impetus for buildings to decarbonize and move towards radical energy and water efficiency is increasingly strong and identified as a priority within the green building sector. The tiny house movement offers an opportunity to both address the challenges of affordable housing and contribute to residential building decarbonization. Tiny houses de-emphasize mass consumption and excessive belongings and have potential to address equity issues such as gentrification by providing living spaces to lowincome residents in desirable housing locations. This paper analyzes the Tiny House in My Backyard (THIMBY) project, investigating building sustainability concepts through the design-build-occupy process in a three-year-old structure. THIMBY demonstrates energy and water efficiency technologies inside an award-winning small living space (18.5 m2). THIMBY was designed to reduce energy and water use by 87 and 82% compared to California residential averages. In practice, it has reduced site energy by 88% and has emitted 96% fewer carbon emissions than a 2100 square foot California Energy Commission 2016 Title 24 minimally compliant home. We discuss the differences between design and performance of energy and water systems, which we find offer important lessons for the further expansion of the tiny house movement and other alternative and micro green housing types. We find that optimizing such houses through integration of energy and water saving technologies, home energy management systems, and strong communication between modelers, builders and occupants will be essential to achieving dramatic energy (87%), water (82%), and carbon (96%) savings.

Guangyu joins us for a year from North China Electric Power University, where he has already worked on clean energy markets and wind energy forecasting. At RAEL (and LBL) he will be working on aggressive decarbonization pathways for China, and the expansion of clean energy services in heavy industry. His recent paper on day-ahead wind forecasting is available on the RAEL publications pages.  To take a look, click here. Send him note and welcome & get to know Guangyu! 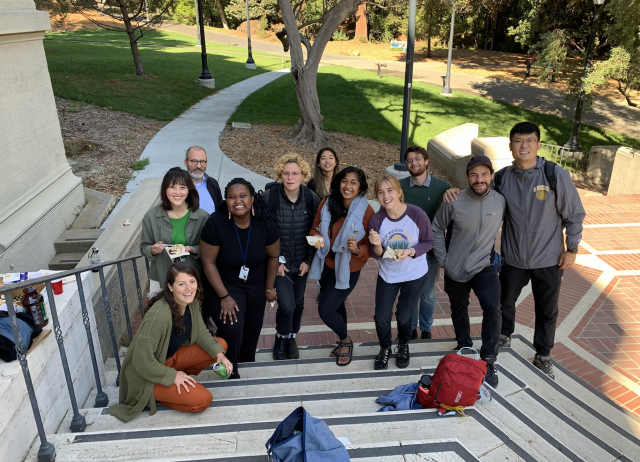 For the May 2021 original in Breakthroughs Magazine of Rausser College of Natural Resources: click here. 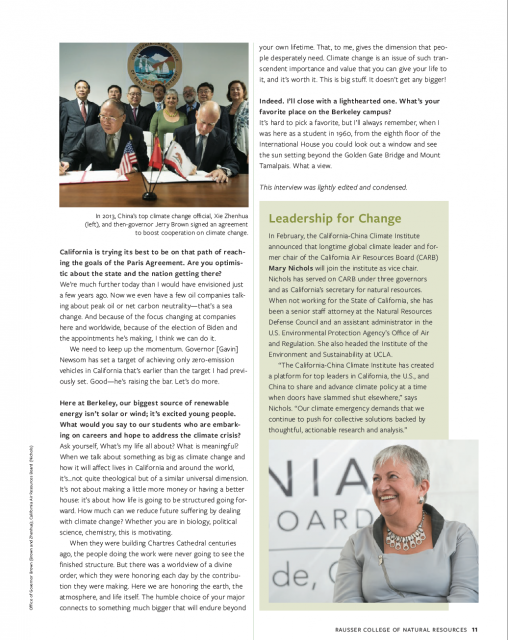 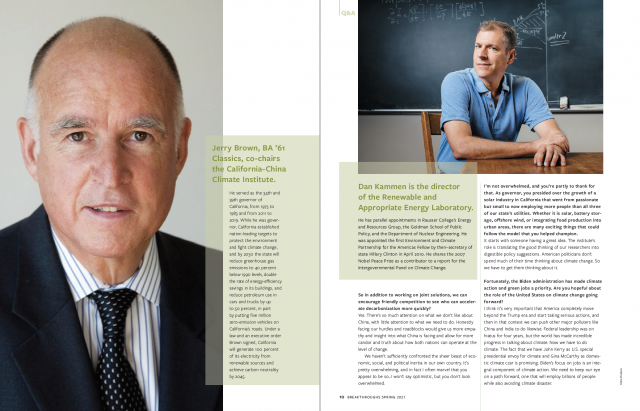 Kammen: Here at Berkeley, our biggest source of renewable energy isn’t solar or wind; it’s excited young people. What would you say to our students who are embarking on careers and hope to address the climate crisis? Brown: Ask yourself, What’s my life all about? What is meaningful? When we talk about something as big as climate change and how it will affect lives in California and around the world, it’s…not quite theological but of a similar universal dimension. It’s not about making a little more money or having a better house: it’s about how life is going to be structured going forward. How much can we reduce future suffering by dealing with climate change? Whether you are in biology, political science, chemistry, this is motivating. When they were building Chartres Cathedral centuries ago, the people doing the work were never going to see the finished structure. But there was a worldview of a divine order, which they were honoring each day by the contribution they were making. Here we are honoring the earth, the atmosphere, and life itself. The humble choice of your major connects to something much bigger that will endure beyond your own lifetime. That, to me, gives the dimension that people desperately need. Climate change is an issue of such transcendent importance and value that you can give your life to it, and it’s worth it. This is big stuff. It doesn’t get any bigger! Kammen: Indeed. I’ll close with a lighthearted one. What’s your favorite place on the Berkeley campus? Brown: It’s hard to pick a favorite, but I’ll always remember, when I was here as a student in 1960, from the eighth floor of the International House you could look out a window and see the sun setting beyond the Golden Gate Bridge and Mount Tamalpais. What a view.

In February, the California-China Climate Institute announced that longtime global climate leader and former chair of the California Air Resources Board (CARB) Mary Nichols will join the institute as vice chair. Nichols has served on CARB under three governors and as California’s secretary for natural resources. When not working for the State of California, she has been a senior staff attorney at the Natural Resources Defense Council and an assistant administrator in the U.S. Environmental Protection Agency’s Office of Air and Regulation. She also headed the Institute of the Environment and Sustainability at UCLA. “The California-China Climate Institute has created a platform for top leaders in California, the U.S., and China to share and advance climate policy at a time when doors have slammed shut elsewhere,” says Nichols. “Our climate emergency demands that we continue to push for collective solutions backed by thoughtful, actionable research and analysis.”

EAST BAY TIMES: MARCH 4, 2021: For the original, click here. Opinion: Daniel M Kamen If you live in Northern California, your utility bill likely will rise by 8% this month. For Pacific Gas & Electric customers, this will be the seventh year in a row of increases. The company’s rates have doubled since 2005 — and they’re going to get much worse unless PG&E changes its ways. Simply put, utilities are spending too much money on the same outdated, unreliable system. Energy consumers are forced to rely on power plants in far-away places to distribute energy on an expensive maze of poles and wires to power our homes. We’ve already seen how running power lines through remote forests can spark massive, deadly wildfires. 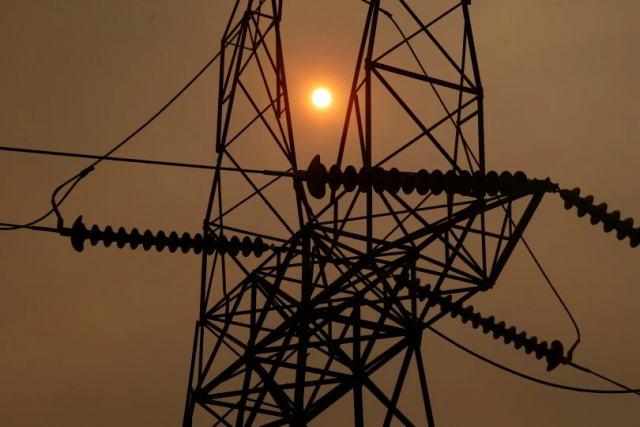 But we have the technology today to reduce the risk of wildfires, lower electricity bills and provide reliable clean energy. The solution is simple: Generate and share more energy where it’s being used. The benefits are tremendous: Higher levels of reliability, flexible and smarter systems, improved environmental quality and huge environmental justice wins for frontline and under-served communities. This is California, the land of innovation and new ideas. Yet utilities in the state are planning to spend $15 billion over the next two years on outdated energy technologies. They need to pivot to invest in decarbonization, efficiency and energy storage. It’s for their own and their customers’ financial well-being.

PG&E isn’t alone. The utility trade group, the Edison Electric Institute, estimates that by 2030, the industry plans to make a total infrastructure investment, largely in outdated technology, of $1.5 trillion-$2 trillion.
From this spending binge, the worst is yet to come. California regulators expect rates to go up 20%-40% in just the next three years.  As we rebuild after a pandemic, who will be able to afford this? Gov. Gavin Newsom deserves praise for his commitment to clean electricity. While utilities are poised to spend billions of dollars that will only lead to rate hikes, we have better solutions that reduce rates for everyone. Solar and wind are the least-cost forms of generation, so let us target investments there instead. A study put together by Dr. Christopher Clack, a weather scientist formerly with the National Oceanic and Atmospheric Administration, found that an energy system built around local solar and batteries could save the United States $473 billion by 2050. A model developed in my laboratory comes to the same conclusion. We’re already seeing the benefits of local solar and batteries here in California. In 2018, California’s Independent System Operator canceled $2.6 billion in utility spending thanks to local solar and efficiency improvements. We should be encouraging this because the people who are hurt most by rate hikes are always those who can least afford it. Low-income communities also face the highest pollution exposure levels from generation of carbon-based energy. It is no secret that the current utility business model of “the more you spend, the more you profit” is broken. It’s time to innovate and put communities and people at the center of the solution. Local clean energy will boost the economy, create jobs and make electricity cleaner and more affordable for everyone. Newsom recently called for a “new paradigm” for how we produce and distribute energy. He challenged policymakers to make energy more local and to look at clean energy technology such as rooftop solar and batteries. We can meet that challenge. UC Berkeley’s Daniel Kammen is professor and chair of the Energy and Resources Group, professor in the Goldman School of Public Policy, and professor of Nuclear Engineering. Twitter: @dan_kammen

The Activists Who Embrace Nuclear Power

For the original in The New Yorker (February 19, 2021), click here. By Rebecca Tuhus-Dubrow In 2004, Heather Hoff was working at a clothing store and living with her husband in San Luis Obispo, a small, laid-back city in the Central Coast region of California. A few years earlier, she had earned a B.S. in materials engineering from the nearby California Polytechnic State University. But she’d so far found work only in a series of eclectic entry-level positions—shovelling grapes at a winery, assembling rectal thermometers for cows. She was twenty-four years old and eager to start a career.