For the article by Dan Kammen & David Williams in PVMagazine, click here.

How to address energy poverty as part of a Just Transition for energy and people and the climate in Africa. Dialog at the African Energy Forum in London: Link: https://www.africa-energy-forum.com 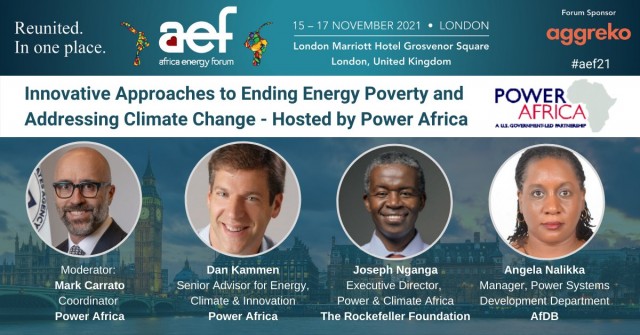 Mapping of affordability levels for photovoltaic‑based electricity generation in the solar belt of sub‑Saharan Africa, East Asia and South Asia

Lack of access to modern forms of energy hampers efforts to reduce poverty. The provision of electricity to off-grid communities is therefore a long-standing developmental goal. Yet, many off-grid electrification projects neglect mid- and long-term operation and maintenance costs. When this is the case, electricity services are unlikely to be affordable to the communities that are the project’s primary target. Here we show that, compared with diesel-powered electricity generation systems, solar photovoltaic systems are more affordable to no less than 36% of the unelectrified populations in East Asia, South Asia, and sub-Saharan Africa. We do so by developing geo-referenced estimates of affordability at a high level of resolution (1 km2). The analysis illustrates the differences in affordability that may be found at the subnational level, which underscores that electrification investments should be informed by subnational data.

Mapping of affordability levels for photovoltaic‑based electricity generation in the solar belt of sub‑Saharan Africa, East Asia and South Asia

Lack of access to modern forms of energy hampers efforts to reduce poverty. The provision of electricity to off-grid communities is therefore a long-standing developmental goal. Yet, many off-grid electrification projects neglect mid- and long-term operation and maintenance costs. When this is the case, electricity services are unlikely to be affordable to the communities that are the project’s primary target. Here we show that, compared with diesel-powered electricity generation systems, solar photovoltaic systems are more affordable to no less than 36% of the unelectrified populations in East Asia, South Asia, and sub-Saharan Africa. We do so by developing geo-referenced estimates of affordability at a high level of resolution (1 km2). The analysis illustrates the differences in affordability that may be found at the subnational level, which underscores that electrification investments should be informed by subnational data.

November 1, 2019
RAEL Lunch Seminar, by Juan Pablo Carvallo, Isa Ferrall, and Serena Patel
"RAEL energy modeling efforts in East Africa"
November 6th @ 12:00 pm - 1:00 pm (Barrows 310)
Abstract:
Access to 'affordable, reliable, sustainable, and modern energy for all' is both a UN Sustainable Development Goal, and a key enabler for nearly all of the other sustainable development goals. In Sub-Saharan Africa in 2014, nearly 610 million individuals lacked access to energy as reported by the World Bank. Therefore, these economies face dual challenges of sustainably expanding and improving their energy supply and reliability while at the same time reducing poverty.
The RAEL lab has engaged in many research efforts over the years with the goal of sustainably improving energy access. Today, we will present a sample of RAEL's recent energy modeling efforts in East Africa such as SWITCH Kenya, SWITCH Uganda, and the Grid and Access Planning Model (GAP). We look forward to your insight and comments. 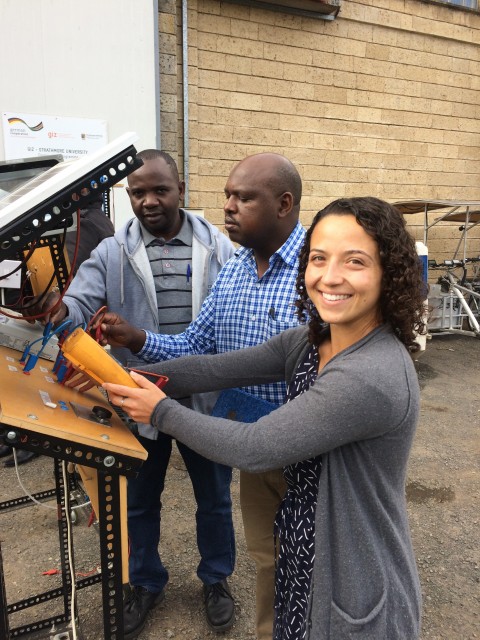 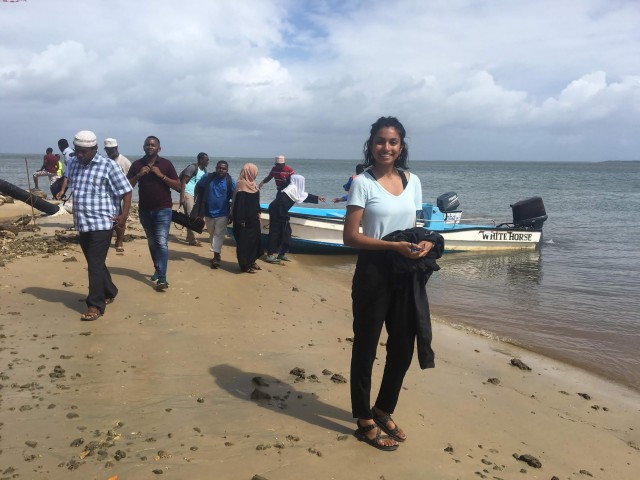 Figure: Serena Patel in Lamu, with Save Lamu and deCOALonize campaigners to talk to fishermen 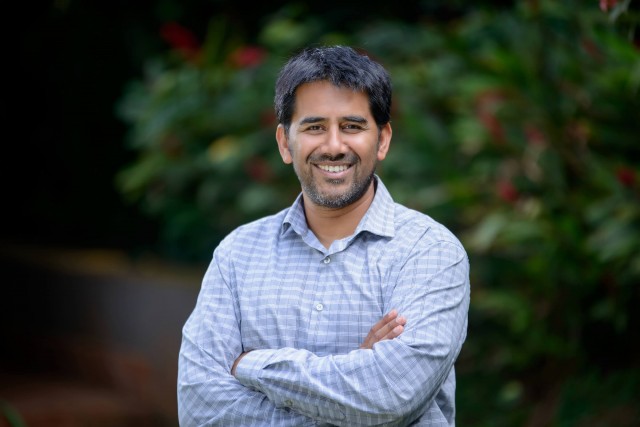 Mr. Jit Bhattacharya has been Chief Technology Officer at Fenix International Inc. since July 2017. Mr. Bhattacharya served as President and Chief Executive Officer of Mission Motor Company until 2014 and previously served as its Chief Operating Officer. He has more than 10 years' of experience in energy storage systems and product development. Prior to accepting the role with Fenix, he worked as a Senior Manager in the special projects group at Apple.  Jit is a Berkeley alum and a former co-chair of BERC.

Renewable energy has robust future in much of Africa

by Robert Sanders, UC Berkeley Media Relations As Africa gears up for a tripling of electricity demand by 2030, a new Berkeley study maps out a viable strategy for developing wind and solar power while simultaneously reducing the continent’s reliance on fossil fuels and lowering power plant construction costs. Using resource mapping tools, a UC Berkeley and Lawrence Berkeley National Laboratory team assessed the potential for large solar and wind farms in 21 countries in the southern and eastern African power pools, which includes more than half of Africa’s population, stretching from Libya and Egypt in the north and along the eastern coast to South Africa. They concluded that with the right strategy for placing solar and wind farms, and with international sharing of power, most African nations could lower the number of conventional power plants – fossil fuel and hydroelectric – they need to build, thereby reducing their infrastructure costs by perhaps billions of dollars. “The surprising find is that the wind and solar resources in Africa are absolutely gigantic, and something you could tap into for relatively low cost,” said senior author Duncan Callaway, a UC Berkeley associate professor of energy and resources and a faculty scientist at Berkeley Lab. “But we need to be thinking now about strategies for fostering international collaboration to tap into the resource in a way that is going to maximize its potential while minimizing its impact.” The main issue, Callaway says, is that energy-generating resources are not spread equally throughout Africa. Hydroelectric power is the main power source for one-third of African nations, but it is not available in all countries, and climate change makes it an uncertain resource because of more frequent droughts. The team set out to understand where wind and solar generation plants might be built in the future under a range of siting strategy scenarios, and how much renewable generators might offset the need to build other forms of generation. Based on the team’s analysis, choosing wind sites to match the timing of wind generation with electricity demand is less costly overall than choosing sites with the greatest wind energy production. Assuming adequate transmission lines, strategies that take into account the timing of wind generation result in a more even distribution of wind capacity across countries than those that maximize energy production. Importantly, the researchers say, both energy trade and siting to match generation with demand reduces the system costs of developing wind sites that are low impact, that is, closer to existing transmission lines, closer to areas where electricity would be consumed and in areas with preexisting human activity as opposed to pristine areas. “If you take the strategy of siting all of these systems such that their total production correlates well with electricity demand, then you save hundreds of millions to billions of dollars per year versus the cost of electricity infrastructure dominated by coal-fired plants or hydro,” Callaway said. “You also get a more equitable distribution of generation sources across these countries.” “Together, international energy trade and strategic siting can enable African countries to pursue ‘no-regrets’ wind and solar potential that can compete with conventional generation technologies like coal and hydropower,” emphasized UC Berkeley graduate student Grace Wu, who conducted the study with fellow graduate student Ranjit Deshmukh. Wu and Deshmukh are the lead authors of the study. The is available in the Proceedings of the National Academy of Sciences and on the RAEL publications site. Charting Africa’s energy future The team set out to tackle a key question for electricity planners in Africa and the international development community, which helps fund such projects: How should these countries allocate their precious and limited investment dollars to most effectively address electricity and climate challenges in the coming decades? Wu and Deshmukh gathered previously unavailable information on the annual solar and wind resources in 21 countries in eastern and southern Africa, and hourly estimates of wind speeds for nine countries south of the Sahara Desert. They developed an energy resource mapping framework, which they call Multi-criteria Analysis for Planning Renewable Energy, or MapRE, to identify and characterize potential wind and solar projects. They then modeled various scenarios for siting wind power and examined additional system costs from hydro and fossil fuels. The team concluded that even after excluding solar and wind farms from areas that are too remote or too close to sensitive environmental or cultural sites — what they term “no-regret” sites – there is more than enough land in this part of Africa to produce renewable power to meet the rising demand, if fossil fuel and/or hydroelectric power are in the mix to even out the load. Nevertheless, choosing only the most productive sites for development – the windiest and sunniest – would leave some countries with little low-cost local renewable energy generation. If, however, countries can agree to share power and build the transmission lines to make that happen, all countries could develop sites that are low-cost and accessible, and have low environmental impact, while reducing the number of new hydro or fossil fuel plants that need to be built. Callaway says that a few countries already share power, such as South Africa with Mozambique and Zimbabwe, but that more countries will need to broker the agreements and build the transmission lines to allow this. International transmission lines are being planned, but primarily to share hydropower resources located in a handful of countries. These transmission plans need to incorporate sharing of wind and solar in order to help them be competitive generation technologies in Africa, he said. Other co-authors are Daniel Kammen, a UC Berkeley professor of energy and resources, Jessica Reilly-Moman and Amol Phadke of the International Energy Studies Group at Berkeley Lab, Kudakwashe Ndhlukula of the Southern Africa Development Community Center for Renewable Energy and Energy Efficiency at the Namibia University of Science and Technology in Windhoek, and Tijana Radojicic of the International Renewable Energy Agency in Masdar City, Abu Dhabi, United Arab Emirates. The International Renewable Energy Agency supported much of the initial research. The National Science Foundation and the Link Foundation supported the expanded analysis on wind siting scenarios.

Recent forecasts suggest that African countries must triple their current electricity generation by 2030. Our multicriteria assessment of wind and solar potential for large regions of Africa shows how economically competitive and low-environmental–impact renewable resources can significantly contribute to meeting this demand. We created the Multicriteria Analysis for Planning Renewable Energy (MapRE) framework to map and characterize solar and wind energy zones in 21 countries in the Southern African Power Pool (SAPP) and the Eastern Africa Power Pool (EAPP) and find that potential is several times greater than demand in many countries. Significant fractions of demand can be quickly served with “no-regrets” options—or zones that are low-cost, low-environmental impact, and highly accessible. Because no-regrets options are spatially heterogeneous, international interconnections are necessary to help achieve low-carbon development for the region as a whole, and interconnections that support the best renewable options may differ from those planned for hydropower expansion. Additionally, interconnections and selecting wind sites to match demand reduce the need for SAPP-wide conventional generation capacity by 9.5% in a high-wind scenario, resulting in a 6–20% cost savings, depending on the avoided conventional technology. Strategic selection of low-impact and accessible zones is more cost effective with interconnections compared with solutions without interconnections. Overall results are robust to multiple load growth scenarios. Together, results show that multicriteria site selection and deliberate planning of interconnections may significantly increase the economic and environmental competitiveness of renewable alternatives relative to conventional generation.

Brooke Maushund, who has worked on energy access in Nicaragua and in Africa, wrote the conference report for the Energy Net Limited summit that preceded the COP22 Climate Summit in Marrakech November 2 - 4, 2016.