Josiah Johnston will be presenting a review of approaches for dealing with uncertainty in the context of Switch, an investment planning tool for low-emission electric power grids. The discussion will also include an introduction to stochastic programming and decomposition tools available for use with the new version of Switch from the PySP python libraries.

This lab meeting will roughly be divided into equal time for presentation and discussion. It will be of most interest to people interested in working with uncertainty in Switch, or general interest in computational tools for optimizing under uncertainty.

Join in for a fun meeting discussing the progress of a variety of SWITCH projects and potential research ideas. Dan Kammen will also provide food to boost brain power and stimulate a lively discussion!

SWITCH — A capacity expansion model for the electricity sector 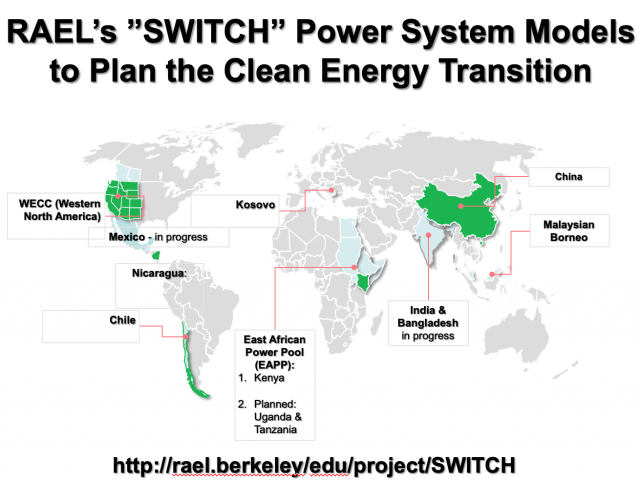 SWITCH is a capacity expansion model that invests in new generation and transmission assets as well as in end-use and demand-side management options (including electrified vehicles and storage) with a high-resolution assessment and planning package to explore the system performance resting from different scenarios. SWITCH was initially developed for California, but has been expanded and refined to explore energy choices across the US West (the WECC, Chile, Nicaragua, China), with future plans to cover the East African Power Pool (EAPP) and India. A wide range of SWITCH publications are in print and in use at various energy, climate, and development agencies.

We study the cost and lock in of carbon intensive technologies due to weak medium-term policies. We use SWITCH WECC—a power system capacity expansion optimization model with high temporal and geographical resolution. We test three carbon cap scenarios. For each scenario, we optimize the power system for a medium timeframe (2030) and a long timeframe (2050). In the medium timeframe optimizations, by 2030 coal replaces gas power. This occurs because the long optimization foresees the stronger carbon cap in 2050. Therefore, it is optimal to transition towards cleaner technologies as early as 2030. The medium-term optimization has higher costs in 2040 and 2050 compared to the long optimization. Therefore, to minimize total costs to reduce emissions by 80 % in 2050, we should optimize until 2050 or have stronger carbon cap policies by 2030 (such as 26 % carbon emissions reductions from 1990 levels by 2030 across the WECC).

The Activists Who Embrace Nuclear Power

For the original in The New Yorker (February 19, 2021), click here. By Rebecca Tuhus-Dubrow In 2004, Heather Hoff was working at a clothing store and living with her husband in San Luis Obispo, a small, laid-back city in the Central Coast region of California. A few years earlier, she had earned a B.S. in materials engineering from the nearby California Polytechnic State University. But she’d so far found work only in a series of eclectic entry-level positions—shovelling grapes at a winery, assembling rectal thermometers for cows. She was twenty-four years old and eager to start a career.

The role of storage in the path to net zero

The path to net zero

The transition to a low-carbon sustainable future is underway. In the United States, specifically in the Western region, more states and utilities are setting ambitious clean energy and electricity targets. The shape the transition will take has yet to be determined. Energy storage has been tapped as one critical enabler, given its ability to level the variability of electricity production, which in turn can increase grid reliability and stability. In collaboration with the University of California, Berkeley’s Renewable & Appropriate Energy Laboratory’s (RAEL), we conducted a study to understand how the transition is unfolding in the Western U.S. region and, more specifically, the role of energy storage in providing flexibility to the grid. We used RAEL’s utility-sector operation and capacity expansion modeling capability (SWITCH), alongside our own research and energy storage experience, and assessed four scenarios to net zero in the Western Electricity Coordinating Council (WECC) region.